The Art of Ras Jahaziel I Iktor Tafari

Welcome to Rastafari Visions, the art of Ras Jahaziel,
Rastafari artist from the Caribbean island of Barbados.
You are invited to first view the slideshow of paintings below.
There you will find a display from the Rastafari Visions collection
that covers over 30 years of art creation. Click play button to hear soundtrack while viewing slideshow


Presenting a collection of art that spans more than thirty years in the making.

Inspired by the teachings, songs, and culture of Rastafari.

on canvas, acrylic, metal, and wood in a wide range of sizes

Also available on a wide range of items like puzzles,

ART AS A TOOL OF EDUCATION

See videos below for more insight on

The Visions of Ras Jahaziel I Iktor Tafari

a vision of healing, repatriation, and African Resurrection

a perspective from an unknown visitor

to an exhibition in South Carolina called "THE CONNECTION"

(between Barbados and the Carolinas)

TESTIMONY OF A RUNAWAY SLAVE

Scenes from "The Return," a vision of Repatriation,

a long cherished vision of Rastafari

a virtual tour of the Rastafari Visions

An exhibition that brings attention to The Haitian Revolution

and the ongoing struggle of the Ayitian people today.

About the artist Ras Jahaziel

throughout the Caribbean region. Also introduced by the flute of Ras Jahaziel. 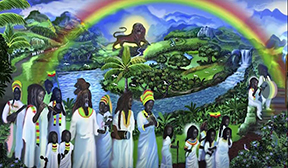 "THE SLAVE IN YOUR MENTALITY" PROLOGUE

EMMERTON
THE LAMENTATIONS OF MOTHER EARTH

INTROSPECTION.mp4 from RAS JAHAZIEL on Vimeo.

ENTER THE CLASS FOR HIGHER EDUCATION

ART AS A TOOL OF EDUCATION

The Visions and Paintings of

SEE ALL PAINTINGS THAT HAVE BEEN UPLOADED SO FAR